Upper Cervical chiropractic care is a profoundly effective, safe, and gentle procedure. The protocol is designed to specifically find and correct subluxations of the Atlas based on scientific and biomechanical procedures. This program is a chiropractic specialty, using precision treatment without drugs, surgery, or AGGRESSIVE MANIPULATION.

The Upper Cervical program is based on precise science and extensive research of spinal anatomy and mechanics. A board certified Atlas Orthogonist is specially trained in every unique aspect of the program to ensure the patient receives the highest quality of care. 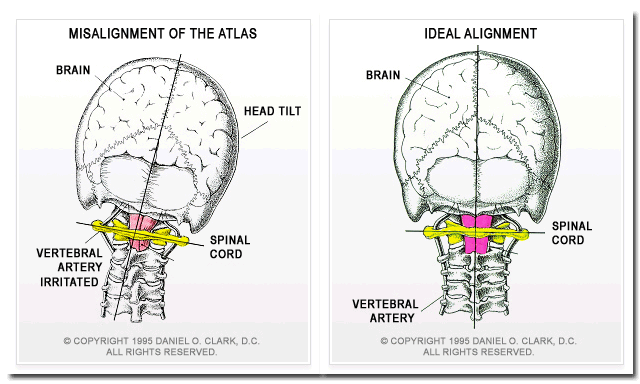 Why is the Atlas so important?

The Atlas is the first bone in the spine, also known as “C1.” It is located right below the base of the skull. “Atlas” was a figure in Greek mythology who carried the world on his shoulders. Similarly the Atlas, weighing a mere 2 ounces, supports the head, which weighs 9-17 pounds! This bone protects the root of the spinal cord. Openings in the atlas vertebra also serve as the entry way for arteries supplying blood to the brain.

The Atlas supports the weight of the head most efficiently in an orthogonal position. In engineering, two lines are “orthogonal” if they are 90 degrees in relation to one another. Thus, the term Upper Cervical refers to the position of the Atlas being 90 degrees in relation to the head and neck.
The spine is like a chain. When the first link is twisted and turned, each link down to the last turns slightly, thereby disrupting the rest of the chain. In this way, even lower back and leg problems may be directly related to an atlas misalignment. The atlas is the first and most important link in that chain. It is by far the most mobile joint of the spine and is therefore the most vulnerable to subluxation.

The best way to schedule an appointment is to use our online booking system,
or send a text with your name and preferred appointment day(s) / time(s) to (662) 393-4848.
Schedule Appointment

We are committed to bringing residents of Desoto County and surrounding communities better health and a better way of life by teaching and practicing the true principles of chiropractic care.